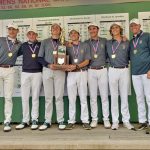 Taylor Harle has stepped down after three seasons as coach of the Dublin Jerome boys golf team.Harle, who resigned Jan. 6, guided the Celtics to the Division I state championship each of his three seasons.Jerome has won nine state titles in 16 seasons overall and last fall had an individual state medalist for the second

The 2019 Dublin Jerome Boys Golf Team just finished another spectacular season winning their third consecutive Division 1 State Championship. This is the ninth time the team has taken the top spot in the state in the 15 years since the school opened. The team participated in 20 regular-season tournaments. They took 1st place 5 times

No Events This Week

Events are added by athletic staff.
View All Events