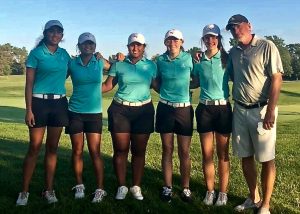 The 2019 Girls Golf Team just finished another great season with a record of 153 wins and only 49 losses. They were undefeated OCC Cardinal Champions (26-0) which gave them their 12th consecutive league title and 14th since the school opened 15 years ago.

They ended the season as the Central Ohio Sectional Champions, 4th in Central Ohio and 7th in Ohio Poll Division I.