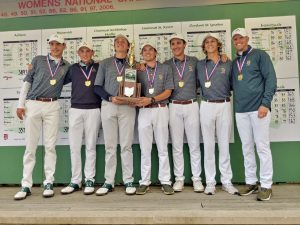 The 2019 Dublin Jerome Boys Golf Team just finished another spectacular season winning their third consecutive Division 1 State Championship. This is the ninth time the team has taken the top spot in the state in the 15 years since the school opened.

The team participated in 20 regular-season tournaments. They took 1st place 5 times and came in 2nd place 7 times. Their average score over the season was 303.94. The team had 4 medalists and 5 runner-up medalists.

In the postseason, they were Sectional Champs at Denison University where they scored 294 and won by 10 strokes.  At the District competition at Apple Valley, they took the top spot as well finishing with a score of 300, winning by 3 strokes. At the State Competition on the OSU Scarlet Course, their 2nd-day score of 298 (low score by 11 strokes) helped them earn a 2-Day team score of 607 which ties the D1 record set by Jerome in 2017.