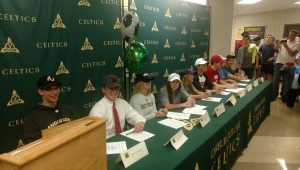 May 8th, 2019: This afternoon, the Dublin Jerome Athletic Department celebrated nine (9) student-athletes as they signed to continue their athletic career at the collegiate level. Below is a quick bio for each.

We congratulate these student-athletes on their performance both on the field of play and in the classroom. They have represented our school and community well and will continue to do so at the next level. We wish them well and look forward to seeing all they accomplish in the future.